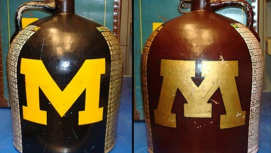 The Little Brown Jug is the oldest rivalry game trophy in College Football.  It dates back to 1905 when Michigan coach Fielding Yost brought his own water jug to Minnesota.  Michigan left the jug in Minnesota.  They wrote and asked that it be shipped back and Minnesota respond:  Come back and win it.  Michigan has won the trophy 71 times, Minnesota 23, and they tied 3 times.

After the kick-off, it is an inauspicious beginning to the delayed start of the 2020 Michigan Football schedule.  There has been a total of six plays from scrimmage and Michigan is down 7 – 0… and Michigan had the opening kick-off.

Michigan’s first play was a first down.  They suffered a penalty and went three and out.  Minnesota blocked the punt.  They took over on the Michigan 17.  Their first play was a run that stopped for a short gain.  On their second play, they threw for an easy touchdown.

They then kicked off to Michigan.  On their first play, Zach Charbonnet ran a huge hole and scampered 70 yards untouched for a touchdown.  Wow.  What first looked like a start to a long season, now looks like it might be more electric.

One can’t judge on a mere 3 minutes into game one.

The Big 10 started their season yesterday, Friday October 23.  It was the day the most Covid-19 cases diagnosed ever during this pandemic.   The first decision by the Big 10 was not to play football at all this year.  I wrote about it back in August:  No Michigan Football.

Pressure mounted on the league to reconsider especially when the SEC, ACC, and Big 12 started their seasons successfully, showing it can be done.  The pressure came from the players, coaches, and even President Trump.  By the time the Big 10 made a decision to have a shortened season, they agreed to a nine game league only schedule with a start date of this, October 24th, weekend.

While writing all this, Michigan and Minnesota have each scored twice.  Michigan leads 21 – 17.  One of the Michigan touchdowns was a hit on the Minnesota quarterback who coughed up the football right into a Michigan lineman’s arms who easily ran fifteen yards for a TD.

I watched a few of the games today including last night’s opener of Wisconsin vs Illinois, Ohio State’s thrashing of Nebraska, and Michigan State’s loss to Rutgers due to too many turnovers.  In contrast to the surprising number of fans at some of the SEC and Big 12 games, the Big 10 stadiums are empty.  They are pumping in fan noise, I am assuming, to give the players and television audiences a more traditional feel to the games.  Most schools are also putting cardboard cutouts of fans of fans in the stadium.  These cardboard cutouts are, in fact, a revenue generator.  For $70, you can upload a photo and the university will print a cardboard cutout and place it in the stands.  I thought about doing it for about a millisecond and decided it was a waste of money.

By half-time, Michigan had a 35-17 lead.  Minnesota will get the ball to open the 3rd Quarter.

I am watching the game.  I am interested and, of course, rooting for my team.  But, it feels different in this crazy year.  The pandemic certainly puts a damper on my mood.  I watched no baseball, basketball, or hockey In their pandemic rescheduled seasons.  I had no interest.  I have watched some NFL and college football but as Michigan was not playing, I have watched much less than in other years.

This month, the war between Armenia and Azerbaijan/Turkey has made sports and, for that matter, all television less relevant.

Earlier in the week, I read an article in The Detroit Free Press about Michigan Football.  In the article they predicted the Michigan game by game results for the season.  They had Michigan losing to Minnesota, Wisconsin, Penn State, and Ohio State for a 4 – 4 record.  We do have a tough schedule and that was a bit of a depressing article to read.  Like most fans, I like to be optimistic at the beginning of the season. 4 – 4?!?  The article pointed out that Michigan had lost twelve starters.  I guess they had a point plus we were starting an untested quarterback in the promising Joe Milton.  So, is it a rebuilding year?  Heck, we have been rebuilding since Harbaugh took the head coaching job.  The difference between the good teams and elite teams is that the elite teams don’t ever rebuild:  they reload.  This is what Alabama, Clemson, and Ohio State do.  Under Harbaugh, Michigan has been a good team.  It is a relief to have 9 and 10 game winning seasons consistently.  It is an improvement over the dismal Rich Rod and slightly less dismal Brady Hoke years. (But, dang, we have to beat Ohio State.)

Minnesota took the ball on like the 18 after the Michigan kick-off and had another impressive drive to first and goal at like the 7-yard line.  The Michigan defense dug in and held them stopping the run and pressuring the quarterback on passing plays.  On fourth and goal, Minnesota went for it and the quarterback on the run fired it over the head of an open receiver.  Michigan took over on downs.  On their first play, Chris Evans ripped off a 60-yard run.   Michigan went on to score making it 49-24… and Michigan missed two field goals they should have made.

Both offenses look good.  Michigan’s look better.  Both defenses are so-so, but Michigan’s is better.  I am impressed with my team so far.

Minnesota had another drive going and were in Michigan territory but a Michigan blitz and sack by Kwitty Paye not once but twice had them at 3rd and 28.  Then… Paye got a third sack in a row.  Michigan got the ball back and is driving with less than five minutes in the game.   The announcers just gave the Michigan offensive line kudos for keeping Minnesota’s defensive line on their heels.

Michigan just missed a third field goal.  Minnesota took over on downs and at the 3 minute mark threw an interception.  Michigan’s ball on the Minnesota 30.  With the back-up quarterback in the game, Michigan got a first down and then turned it over on downs with 1:45 left in the game.

The final and most satisfying score:  Michigan 49 – Minnesota 24.

The Little Brown Jug stays in Ann Arbor for another year.

An open letter to Recep Tayyip Erdogan, President of Turkey.

Can I call you Recep?  Actually, I am not sure why, but I prefer Reg or Reggie.

I do understand ego and your wanting usurp that Ataturk fellow in the minds and hearts of “your” people.  I understand the use of Islam to control your people.  It helps cover up your corruption and it gets them behind your thinly veiled ambition to be the second coming of an Ottoman Sultan and to establish a new Caliphate.  That is quite ambitious Reg.  I get it, you are megalomaniac.

You were masterful in ridding the military of all those secular, republican, generals.  That fake coup you staged in July 2016 was brilliant.  You basically established your lifelong rule in Turkey with that one act.  You purged the government and universities of Never-Erdoganers.  You even fooled the Western Press into believing it was a real coup. I mean, Reggie, what a gift you have.

I was curious, Reg, did you dream this shit up while sitting on the gold throne you built for yourself in your new palace?

Lately, you’re taking a new tack.  Frankly, Reggie, I am none too pleased about it.  Perhaps is it the next phase of a master plan you have had all along.  You are actually trying to expand Turkey’s influence in the region by your incursions into Northern Syria.  It was in the news that you even drew up plans to invade and conquer Greece and Armenia.  It truly is an Ottoman obsession.

Now, you are backing your wayward cousins in Azerbaijan into an attempt to conquer those upstart Armenians in Kharabagh.  You even went so far as to say, “finish the work our grandfather’s started.”  I imagine if no other countries seriously complained and offered military assistance to Armenia, you would do just that as a first step to… what end?  A Pan-Turanic empire?

This week you had a meeting with your buddy Putin about this war with the Armenians.  You told him, and I paraphrase, that the Armenians must leave the occupied territories of Azerbaijan.

Stalin gave the majority Armenian Kharabagh to a newly formed country Azerbaijan in 1921.  He did it to spite the Armenians.  The newly founded thing called Azerbaijan occupied Armenian lands then.  Six short years earlier, well, Reggie, you and the rest of the world know what happened.  Your grandfathers committed Genocide and occupied everything we had.

Occupied territories?!?  Give them back.  While you’re at it pay your tab.  Eleven years ago, in his book Children of Armenia, Michael Bobelian estimated you owed us $44 Billion in confiscated lands, buildings, and businesses.  That figure is probably $50 Billion now.  Your gold throne can be the down payment.  Occupied territories indeed.

I know Reggie.  Might makes right.  Your grandfathers evoked that in 1915 and you are trying to do the same right now.

P.S.  My friend Steve wants you to watch this video.  But, let's be honest here Reg... you already know these facts.